If you have a curvy shape, find the right styles of tops is critical in how you look. Because curvy girls have full bust, the right style of tops will make you look slimmer while the wrong styles can make you come across as top heavy.

Here’s a complete guide with 8 best types of tops for women with curves, and 4 types of tops you should use caution with or even stay away from.

Wrap tops enhance the waist of a curvy woman and also does well in exaggerating the curves for a better fitting. They are versatile and perfect to be worn to various occasions to give you a feminine and gorgeous look that could make you appear outstanding.

Aside from accentuating the curves of a woman, the features of the wrap top also elongate the frame to make you appear leaner and slimmer which could add an effect of height to your figure. They are best for accentuating your assets and this makes them a favorable choice of tops for a woman with curves.

Peplum silhouettes are fitted at the top part of the body of a curvy woman and flare out above the curves to make you appear elegant and sophisticated. It has an A-line shape that is structured to define the curves and highlight the waist of a curvy woman.

The silhouette is built to add volume to the top half of a curvy woman’s body and in this way balances out the body proportion of a curvy woman. Peplum tops should be opted for by a woman with curves because the ruffles it has in it are a good way to emphasize the curves.

How to choose a Peplum Silhouette top

Peplum silhouettes cinch the waist of a curvy woman and elevate her natural waistline and it is appropriate that you pick peplum silhouettes that fit your waist properly without causing any form of discomfort or bulging out around the waist, else it would give your overall figure an undesirable appearance.

Another way to naturally emphasize the curves of a curvy woman is simply by choosing tops with an empire waistline because they give a contemporary look to the general appearance of the woman.

They are suited for a curvy figure because they have a unique structure that could help flatter both your upper and lower figure. They are great because they do not draw too much attention to the hips of a curvy woman.

One very basic and classy top design that works well in cinching at the slimmest part of the waist is the belted top. While some tops come with belts, others do not do so and the best way to style loose tops is by wearing belts around the waist of the curvy woman.

Belted tops are effortlessly cool because they keep the attention of the eyes fixed on the waistline.

With the waist cinched in, the curves get more exaggerated and give the curvy woman an amazing aesthetic figure that helps her comfortably embrace her curves.

How to choose belted tops

Not all them are created equal!

A curvy woman should wear tops that don’t have wide belts.

Rather, opt for those with slimmer sizes for a better and more balanced effect on the body figure.

Belts that are tied on the side are more flattering for curvy women, as they draw less attention to your tummy.

The structure of the v-neckline pulls the attention of the eyes vertically to help exaggerate the curves and highlight the waist without causing any form of discomfort but building a wall of confidence around the figure. The v-neckline top brings focus to the waist of a curvy woman making them a warm neckline design for the figure.

Keep sleeves of tops fitted and not voluminous for a better fitting and visual balance in the shape of a curvy woman because too wide tops would only make the body figure appear too bulky, especially the upper half of the body figure.

Wearing tops with so much volume in the sleeves is not recommended and to create a more balanced body proportion in the entire figure of the curvy woman, opt for tops that have fitted sleeves as they are most desirable for the curvy figure.

Tops with fitted sleeves are the best tops for a curvy woman as they do not cause any form of discomfort and create a balance in the silhouette of the curvy woman.

They make the woman appear very beautiful by making her curves appear exaggerated.

Except you intend to add more width to the natural curves which is not necessary, then you should never wear tops with horizontal stripes as they are not the best choice of tops suitable for a curvy woman.

Horizontal tops would give the eyes the illusion that the curves of the woman are too wide and this would cause a visual imbalance in the shape of the curvy woman.

Horizontal striped tops are not the most flattering striped top style for a curvy woman and shouldn’t be worn on the figure if you must attain balance in your entire figure. They are not recommended as a unique top style and should not be a part of the wardrobe staple of a curvy woman.

Patterns on tops could be as important as stripes on the top of a curvy woman, with the most satisfactory design being the vertical patterned top. This pattern of top compliments the natural curves of the curvy woman.

The smaller-sized patterns fit a curvy woman the most because it is a better way to flatter the curves and appear stylish without too many details. The vertical patterned top would best highlight the waist and accentuate the curves to fit the figure better.

Why choose a vertical striped top

The vertical patterned top gives the eyes an illusion of a leaner figure and this is essential to make the natural hips seem slimmer.

Do not go for patterns that are too bold else they would create a visual disproportioning by throwing off the curves.

Form-fitting tops make you appear slimmer and more gorgeous because they are tailored to fit your curvy shape.

This style of the top helps to define the curves so the woman could appreciate her curves and feel confident whenever she steps out on any occasion.

Wear form-fitting tops if you want to slay and appear elegant at any given point.

Be careful to not assume form-fitting tops for those that are too tight, i.e. body con, because that is not the idea of a form fitting top.

A form-fitting top is tailored to reveal your natural body outline without causing any form of restriction around the curvy figure.

They are designed to embrace the natural curves comfortably and emphasize the waist of a curvy woman.

Be cautious of tops with unstructured shoulders

A simple rule to follow when choosing tops for a curvy woman is to avoid wearing tops with unstructured shoulders because they would make the bust of the woman appear too big. Check that the shoulders you are opting for sit well on you so they could allow for more support to the bust.

Unstructured shoulders would make a curvy woman with a big bust lose her feminine and defined figure and that is not flattering. Always make sure you purchase tops with shoulders that balance your curvy figure.

They do not fit the curves and give the curvy woman a shapeless figure because they are loose around the body figure. Tops that are oversized most times hide the curves of the woman which does not feel good and is not encouraged as a top style idea.

Avoid wearing tops that are not the right size because they would disguise the curves of a curvy woman. It is advisable to wear tops that give the curvy figure a good shape and structure as that is a more preferable top style. 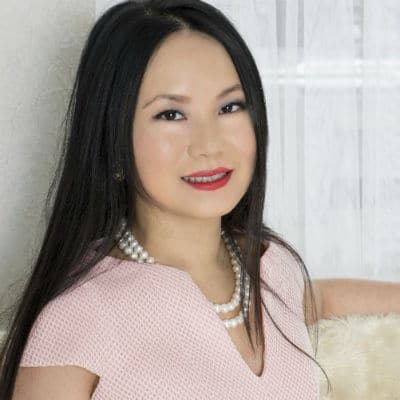 Hello there! My name is Chi Li, 5'2", author of "The Petite Style Bible" . Petite Dressing is an online petite clothing store and fashion blog for to help all women to understand their body shape and dress accordingly to look confident and chic. Start here if you are new. Click here to watch me on Youtube. 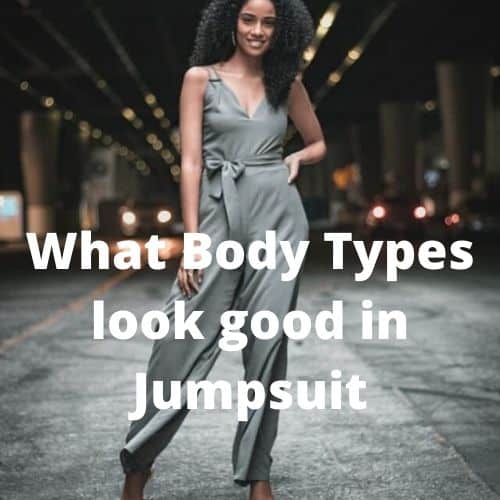 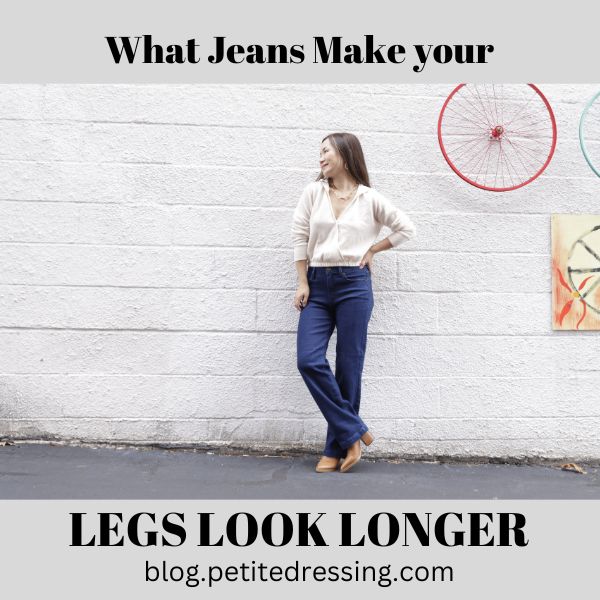 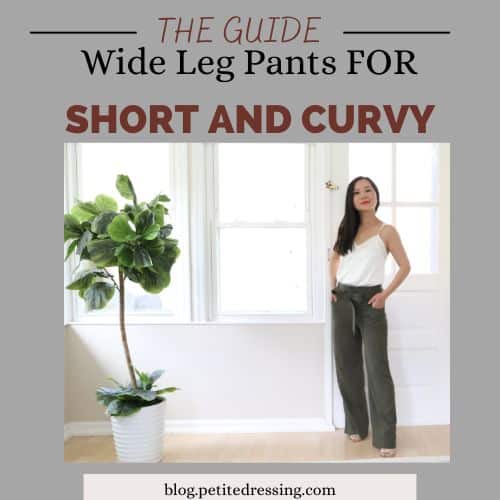 The Complete Wide-Leg Pants Guide for Women With Short Legs 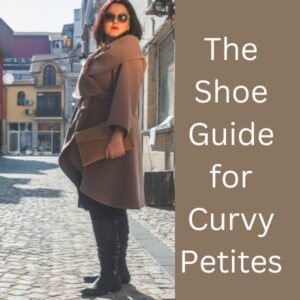 The Complete Shoe Guide for Short and Curvy Women 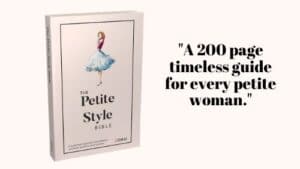 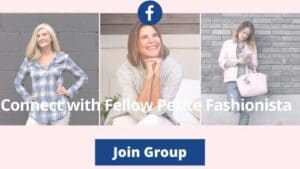